﻿ ﻿ We are finally in an area where we can update the blog.  We have been in so many beautiful places the last few days.  We have enjoyed each one of them.  Ken will get the pictures up soon, I hope.  We probably have taken 1000 pictures.  I love digital cameras!
﻿ ﻿ So now we have seen Arches, Dead Horse Point in Canyonlands National Park, Mesa Verde, Natural Bridges, Capital Reef,  Kodachrome Basin, Bryce Canyon, and Zion's.  We have decided we don't have enough superlatives to describe it all.  Every place is different but so spectacular.  I was trying to decide which was my favorite.  Maybe the Bryce Amphitheater area.  It took my breath away!  We will get some pictures of it on the blog, but I still say that pictures just don't do it justice.
We had interesting weather much of the way.  In Moab it was cold and windy at night.  One morning the drain hose was frozen, and the sink wouldn't drain.  Ken had to pour boiling water over the hose so we could do the dishes.  The day we went to Mesa Verde was nice, just warm enough, but not uncomfortable.  The experience of seeing the ruins of the cliff dwellings was awesome.  We stayed in Cortez, CO for three nights and went to church there.
Then we went back to Utah and to Hwy 95.  This took off across some of the most desolate and beautiful country I have ever seen.  However, we were completely cut off from the world.  No cell coverage or WI-FI.  We stayed at a Rodeway Inn that night, the only thing around.  We went into the area just east of Bryce Canyon and stayed in Kodachrome Basin.  It was a beautiful campground, still no coverage for anything, but quiet and dark.  I got to look at the stars and fill my soul with the beauty.  It was still windy and cold at night, but perfect for hiking around the parks.  Our bed warmer and heater were much appreciated.
Last Saturday, Sunday, Monday and Tuesday we stayed outside of St. George.  We saw Kirk and Paula on Sunday, then spent Monday visiting first with the Reeds, and then Parises.  It was good to catch up with them.
We are at Marcia and Grant's in Moapa now.  The weather has really warmed up.  We didn't have to have the bed plugged in last night!  We will be off next to Arizona.  Back later!
Posted by Ann and Ken at 2:49 PM No comments:

I will post just a few of the 300+ pictures we took in Arches Natl Park--it was phenomenal.  We did a little hiking, but mostly just drove to each one of the scenic turnouts and stood in awe.  We left when the visitors' center closed, but came back again the next morning so we could spend a little more time.

This was a great day. We did the Arches and then Dead Horse Point at sunset.

Saturday 4/14 we drove from Moab to Cortez, CO in a snowstorm, so our site-seeing was confined to the Anasizi Heritage Center in Delores.  We spent a couple of hours in the museum and it was fascinating.  I really came away with a sense of reverence for the old ways, and the tremendous connection the current people have with their ancestors and heritage. 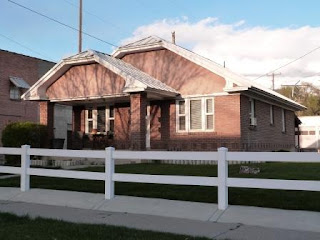 Time to catch up the happenings.  We were in SLC and environs for most of the 1st week in April.   We took a ride to American Fork and saw the house that Gram lived in when she took her first teaching position after graduation from college.  She told us she had taken in the landlord's washing and was drying it on the oil heater (which they did regularly when it had frozen) and one of the ties from an apron fell down into the heater and set the clothes on fire.  She grabbed the clothes and threw them out in the snow to put out the fire, but she managed to burn the aprons of one pattern and the skirts of another, and they were parts of matching uniforms.  She also exploded the heater by adding oil when she thought it had gone out, and blew soot out of all the stovepipes in the house--top to bottom.  What a mess! 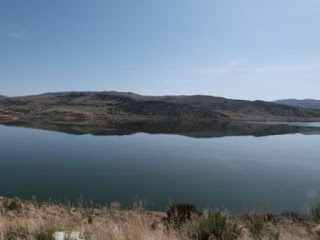 We went up to Evanston to see Bob and Becca Alkire--I forgot to take pictures, but snapped this picture of Echo Reservoir on the way.  We had a nice visit--Becca is recovering from knee replacement surgery--spends 8 hours a day on the rehab machine, but is making great progress. 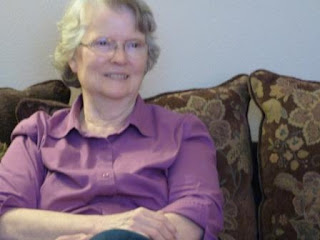 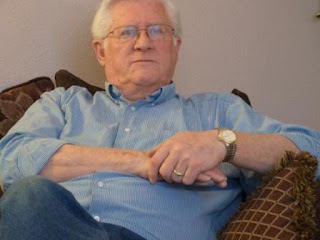 Spent most of Wednesday with Jimmy and Doreen, they are doing great.  We visited and Jim gave Ann one of his Santa Claus ornaments--a rare honor.  We then drove from Spanish Fork to Price to see Bonnie and John Thomas.  They were just getting back from Moapa, so we visited until midnight and then all left early the next morning. 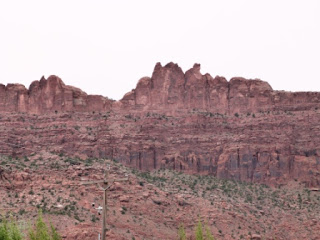 The view from our Campground in Moab was spectacular--a great sample of what we would see in Arches National Park the next day. 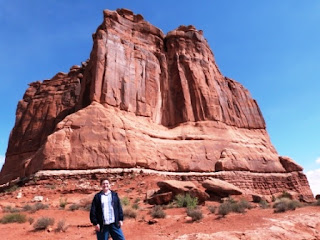 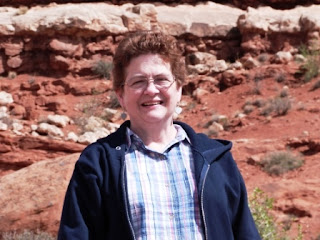 Here Ann is at "The Organ", and another one to see just how happy she was with all the sunshine!  I need to put this to bed for tonight.  I'll try to update again tomorrow since we may be snowed in in Cortez, CO for a day or two at our next stop.
Posted by Ann and Ken at 9:34 PM No comments:

We have been enjoying our time here in Utah.  We went into town Tuesday and visited the new International Art Exhibit at the Church History Museum.  They wanted visitors to vote on their favorites, but we couldn't decide.  There were entrys from everywhere and in every medium.  Some very lovely bronzes and quilts!  We also got to go to the Salt Lake Temple.  I had forgotten how lovely it is.
The new City Creek Mall is spectacular!  Lots and lots of stores and a great food court.  I about wore out my shoes walking around.
Wednesday was the nicest day this week.  We went out to Antelope Island again.  The first picture was early in the morning, the lake was calm, and the grebes were in formation on the flat warer. We had been there in February but that is a quiet time of year.  It was also too chilly to wander around much.
We were still too early in the spring for the main bird migrations, but we did see at least 15 idenifiable bird species, bison, antelope, a coyote, deer, and jackrabbits.  The ones I really liked were the American Avocets and the Great Horned Owl.  The female owl was on her nest, and the male was in a nearby tree.  They are watched over and protected by the park rangers in the area since they are an endangered species.  We had a great time.
﻿ ﻿