I usually try to report on the positive stuff, because I don't want to discourage anyone from coming to Africa, but this week has been one of unusual happenings, and I want to assure all my followers that we are doing well.

I am sure that many of you have read or heard the reports of catastrophic flooding in the Southern Region of Malawi, including Blantyre where we are serving.  Although the cyclone which spawned the storm did severe damage here in Blantyre, none of the missionaries were impacted by it.  The trouble is that the less expensive homes here are built of bricks which are only partially fired, and when they get too wet they return to their natural state which is clay.  The mortar they use to build the houses is made of insufficient quantities of cement mixed with river sand. The sand contains a significant portion of dirt and charcoal, which soaks up water.  You can see that the consequences of a sustained torrential rainfall (more than 6 cm/day) combined with strong winds which blow the rain under the roof will eventually cause the collapse of the house.  The walls surrounding the compounds are built even more cheaply, and collapse across the roads, blocking traffic until the neighbors team up to clear the bricks out of the way.  That much rainfall for three or four days also saturates the ground, and coupled with the storm winds up to 90 km/hr brings down large trees, some over 15 m tall which block entire major roadways.

Since the storm,  the missionaries have fanned out into their areas and with the help of  black plastic sheeting purchased by the church, they have covered many exposed portions of homes to prevent further collapsing.  They were also involved in moving families and their possessions into adjacent houses of friends and family.  Although we had over a dozen homes destroyed or significantly damaged in our district, we were fortunate to have no major injuries.  The mother of one of our branch members was caught by falling bricks and severely bruised, but seems to be making a good recovery.

I WANT TO EMPHASIZE, The homes we rent for the missionaries are significantly stronger, and are faced with good cement plaster to keep the bricks dry, so they seem to have escaped even minor damage, although we did lose 5 m of wall around one compound because it was undermined by what is usually a very small creek which was carrying about 50 times as much water as normal. And of course, that much rain reveals the leaking places in the roof, so we had crews repairing several roofs.

Once the rains subsided, the runoff took care of most of the water within 24 hours, and now we wait for the end of the rainy season to make more permanent repairs to the damaged homes.  Our main concern now is drinking water.  The runoff silted up the intakes at the Water Board, and there was no input to the city water system for about 4 days.  The natives resort to using ditch water from the runoff, and you see lines of women with water containers on their heads marching back from the places of collection.  We purchased a 750 l. water tank and mounted it in the back of one of our mission trucks.  The Zone Leaders go down the to Water Board and purchase the water directly from the treatment plant, then make the rounds to our flats and deliver water which is stored in large buckets in each location. There is no commercial water delivery such as there is in other parts of Africa.  All in all it has been an eventful week.

The work goes on.  As soon as the rains subsided, and even during the lulls in the storm, our missionaries were out visiting their families, with help, hope, and encouragement as they preach the gospel. They are amazing, dedicated workers for the Lord, and I admire them greatly.

As for the rest of the Southern Region, it has been much worse.  The section of the Great East African Rift valley which lies downstream from Lake Malawi is very flat and wide.  It all drains through the Shire (pronounced Sheeray) River which eventually flows into the Ruo River, the eastern border between Malawi and Mozambique.  All of that water simply spreads out across the valley, and has displaced over 200,000 people and resulted in more than 200 deaths in the region.  In that portion of the country, the situation is still critical, with many people still stranded on small raised portions of ground, with starvation, cholera, and no drinking water causing untold misery for these impoverished people.  They have lost everything, homes, possessions, food, crops, and will face food shortages for an entire year before they can plant and harvest again.

We visited this area about three days before the storms started, and although there had been minor flooding from previous rainfall, there was no major damage apparent.  That all changed within the week that followed.  We have not attempted to survey the area, since many of the bridges and roads have been washed away, and the military is in charge of rescue efforts.  We have at least three member families in the area and cannot contact them.  With no power, their phones are dead, and not much hope of contacting them any time soon.  Two were on higher ground, but I have not heard about the other family at all.  It is worrisome, but not a place where we can help as yet.

You may have seen the reports, but I'll include a current link which has some of the latest pictures from Medicine Sans Frontiers or MSF (Doctors Without Borders) who have staff stationed within the area.  The one thing not mentioned is the presence of crocodiles which move out of the river channel and into the farming areas with the high water.  So far no deaths attributed to the crocodiles, but they are a worry. Of course much of the livestock has been swept into the river, so they may not be very hungry.
http://www.google.com/url?sa=t&rct=j&q=&esrc=s&source=web&cd=1&ved=0CCAQqQIwAA&url=http%3A%2F%2Fwww.theguardian.com%2Fglobal-development%2Fgallery%2F2015%2Fjan%2F21%2Fmalawi-floods-cause-devastation-in-pictures&ei=jba_VIb1H4HX7AaSlIEQ&usg=AFQjCNFPWs-g6JNba84IZ3EWdPNeUs-RtA&bvm=bv.83829542,d.ZGU&ocad=rja
International response by governments has been quite good, but this situation will require major financial help from the NGO's of the world.  If you have a favorite (but well-known) non-profit to which you would like to donate, please do.  MSF is already here and on the ground, but there are many others, including World Food Program, or the Humanitarian Fund through the Church of Jesus Christ of Latter-day Saints.

We love our assignment here.  We love the people.  We love the work of bringing souls unto Christ.  We have only two months left to do good, and we hope to be able to leave something of eternal value, as well as our hearts, here in Malawi.
Posted by Ann and Ken at 8:37 AM No comments: 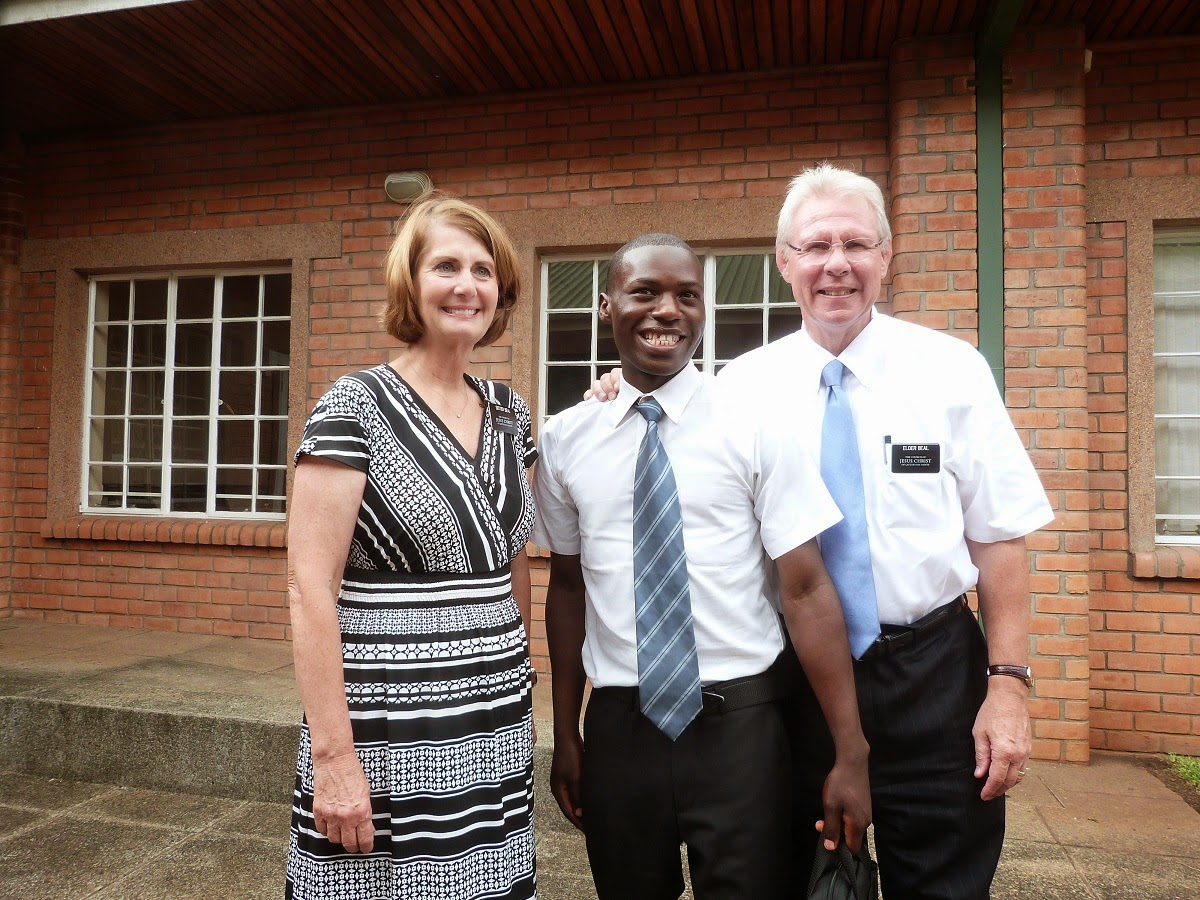 Our readers might appreciate this little bit about pre-mission experience.  Elder Kapatamoyo boarded a bus in Lilongwe for a 5-hour ride to Blantyre to be set apart by a counselor in our Mission Presidency, Elder Beal.  It was the first time he had been outside of his home town and the first time he had ridden on a nice big bus.

We gathered all the Senior Missionaries and his temporary companions and Elder Beal set him apart for full-time service to the Lord.  Then he went out with his companions to finish the day, actually got to help teach a lesson.  I marvel at these young people here.  This young man, probably about 20, had been a branch missionary starting when he was about 14.  He has served as the Branch Mission Leader, and as the Branch Clerk.  He was working on his second year as a seminary teacher when he received his mission call.  I wonder how many USA elders are half as prepared when they leave.  He has an awesome testimony, a deep knowledge of the gospel, and was practically jumping up and down with excitement to be starting his mission.  It was a great treat, just to meet him.

We took him to the airport this morning, after he had spent the night at the missionaries' flat, and with his passport and yellow fever card, we bid him Godspeed and left him to catch his plane (something else he has never done before).  We coached him as best we could on what to do when he got to Jo-burg airport, and promised that the Missionary Training Center president or his assistants would find him.  This is really a leap of faith.  I'll attach a picture of him with President and Sister Beal outside our chapel.
Posted by Ann and Ken at 2:12 AM No comments: