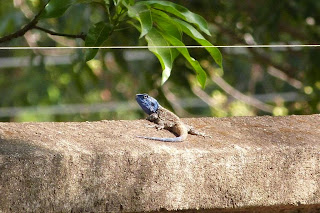 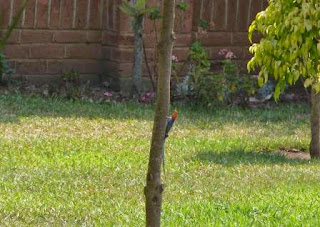 First a little followup on the wildlife around here. We have an amazing assortment of lizards, geckos, and chameleons in our yard. From time to time we see different species, and then not again for six months. I'm not sure where they disappear to, but they rotate in and out and we have a selection all year long. These two pictures are of a couple of the more colorful ones, a blue-headed one and a pink headed one. There is also a golden-headed one, but I haven't gotten a picture. We have lots of the smaller ones that come in the house searching for flies and mosquitos. They range from about 2cm long to about 8cm. They are shy and quick, but startling sometimes when you almost step on one. We try not to disturb them so they can help with insect control. 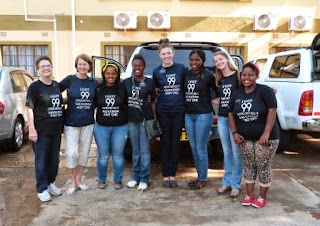 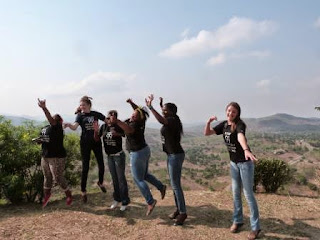 The Sisters in our Zone got tired of waiting for the Elders to organize an outing, so they secured permission to go on a Sisters-only activity day. We loaded them in our trucks and went to Majete National Park, about a 90 minute drive south of here. They traditionally get matching t-shirts for these types of things, so here are some pictures of our day trip. 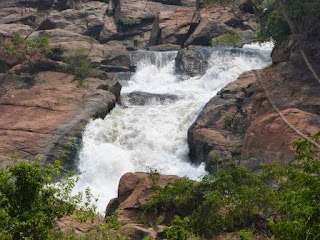 This falls is only a small side-stream of the Shire river. There are another half-dozen sections in this cascade, but this one is beautiful. 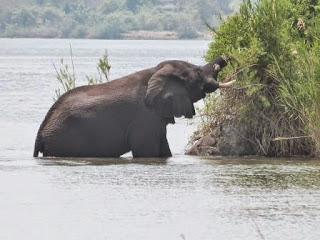 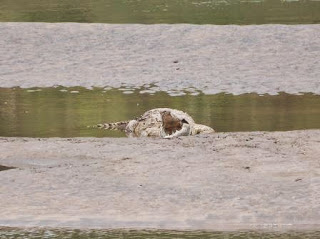 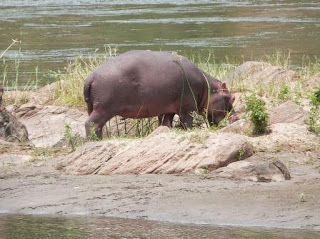 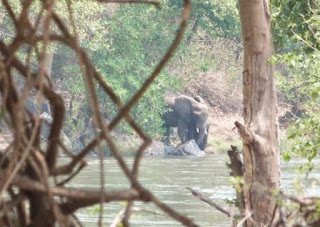 We had an eventful trip, saw a number of antelope species, but the elephants, crocodile, and hippos in the middle of the river were the most exciting. The elephant on the far side of the river represents a single cow and calf. We watched an entire herd of perhaps twenty or so walk through this same clearing over the space of 30 minutes. Awesome!  It was a great opportunity for all the Sisters, since many of the African Sisters had never seen the big animals.  They were as excited as the Americans. 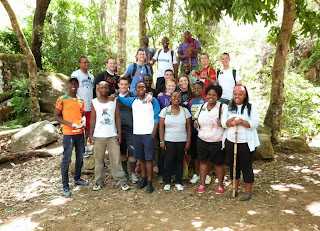 The following week, the Elders got permission for the "real" zone activity, and the group hiked up Mulanje Mountain, the second highest peak in Africa. They didn't summit, but had a great spiritual feast and brae alongside one of the pools in the river. We didn't hike with them, but enjoyed the get-together. 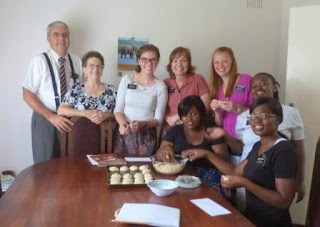 As Christmas was approaching, we were setting up to have both Malawi zones together here in Malawi. The Sisters have all been asking Sister Reynolds to teach them how to make her famous bread, so she invited them over to the house to make the rolls for our dinner. They had fun, and we fed 51 people on Monday night before Christmas. 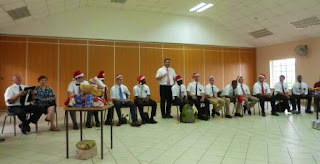 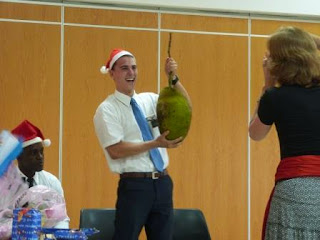 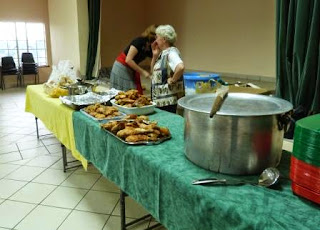 The gift exchange was hilarious, President Erickson explained the rules, and then we divided the group into two halves, with two stacks of presents and all could choose from either side, but the stealing and laughter was double fun. The jackfruit got the biggest applause, it is big enough to feed ten people, and is quite sweet. Then came Christmas dinner, with fried chicken, rice, mashed potatoes and chicken gravy, stuffing, salads, and of course three kinds of sweet breads for dessert.

We met the next morning for continental breakfast, and a really spiritual meeting to consider the importance of the Sacrament ordinance. President Erickson counseled us to make this time a time of change to a better and higher sense of purpose in serving our Savior, Jesus Christ. As we renew our covenants each week, make this week a time to renew our dedication. 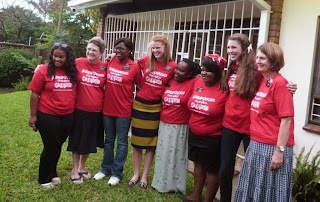 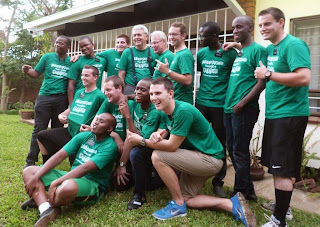 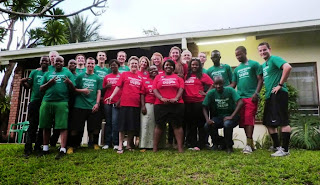 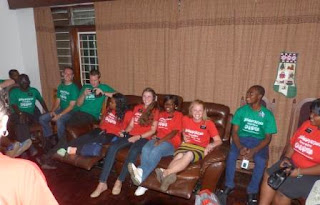 Christmas Eve the Zone was all here at the house, and we watched the First Presidency Christmas Devotional, so it was a quiet, spiritual end to the day. Of course, the new Zone T-shirts were red and green, and we got pictures between the rainstorms. 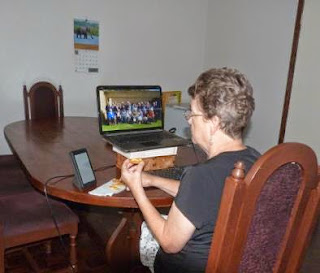 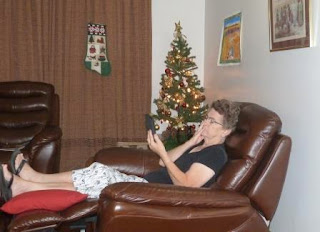 Christmas day was much quieter, we just kind of unwound after all the activity. Sister Reynolds is multi-tasking, her computer is on, she is reading on her Kindle, and eating leftovers for lunch. Then it was time for some serious relaxing and reading. We hope that all of you had a blessed Christmas, and that by following Jesus Christ throughout the new year, you will find great joy, as we do in serving Him and keeping his commandments.
Posted by Ann and Ken at 9:33 AM No comments:

Hooray, it has finally started raining.  The rainy season is supposed to begin about the first week in November, and here it is the second week in December.  The maize is not irrigated, it depends on rainfall, so nothing has been planted, and we are six weeks late in the season.  It started raining on the 9th, and has rained a couple of times since.  All the maize fields were planted by the 10th.  The cultivation is all by hand, with a broad-bladed hoe.  The blade is a heavy piece of flat iron cut to shape with a spike on the top. The handle is about three feet long, shaped from a heavy branch of a tree with a large knob about the size of a softball at the end.  They drill a hole in the knob, heat the iron blade until it is red hot and then drive it into the hole, where it lodges fast.

These are drawings from archeological digs, so you can see that the concept is not new.  Similar hoes are found all over sub-Saharan Africa.  This drawing shows just a branch of the tree, but the ones used here in Malawi are shaped from the piece of the trunk from where the branch is attached.  That joint is the strongest part of the tree and resists splitting from the constant pounding of the hoe into the ground.

The women do the majority of the cultivation and weeding, but the short handles on these hoes mean that they are constantly bending over as they work.  It is back-breaking work, but the length of the handle seems to be a cultural thing.  Long-handled hoes are seen as a sign of laziness.  It's crazy.

Along with the maize planting, the rain affects several other things, especially the frogs.  The ones outside our dining room window are deafening.  The frogs themselves are about the size of your thumb joint, but they are expert at finding a location which will amplify their chirping.  The loudest one has located himself at the base of one of the pillars in our perimeter wall.  He sits in the corner, on a broken brick, and it all acts like a megaphone.  He is so loud, that when I first went out to see what was making the noise, I couldn't get close enough to see him because it hurts to be anywhere near--really!  It must be well over 110 decibels, painful to listen to for more than a minute or two.

I will try to upload a short clip so that you can tell what it sounds like when they are all going together.  It's kind of like "the wave," in the stadium.  One frog starts somewhere in the distance, and is immediately followed by another and then another until they are all in chorus and finally dies down when they run out of energy.

I finally remembered to take a picture of our night guard with his University of Washington souvenir cap.  He was so excited to have his picture taken so that we could remember him.  I told him I'd post it for some of my Dawg Fans who would appreciate seeing it so far from home.  I have actually seen advertising t-shirts from Snohomish County businesses.  It is amazing to see things from home.  We see WSU Cougar shirts and sweatshirts every once in a while as well. 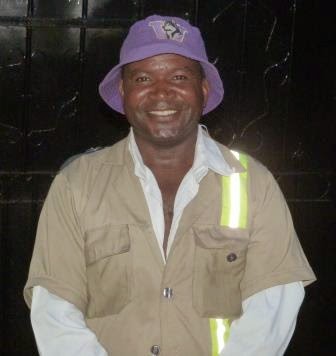