Most weeks are very busy, but every once in a while things go crazy.  Wed 25/02/15 was one of those.  I was scheduled to take Elder Njanji to the airport at 11:00, and had agreed to take his parents with us to see him off to the Manchester (UK) MTC where he will be in training for two weeks before going to his assigned mission in Birmingham.  We had agreed to meet in Ndirande at the petrol station, and a member of the Stake Presidency was to go with us. 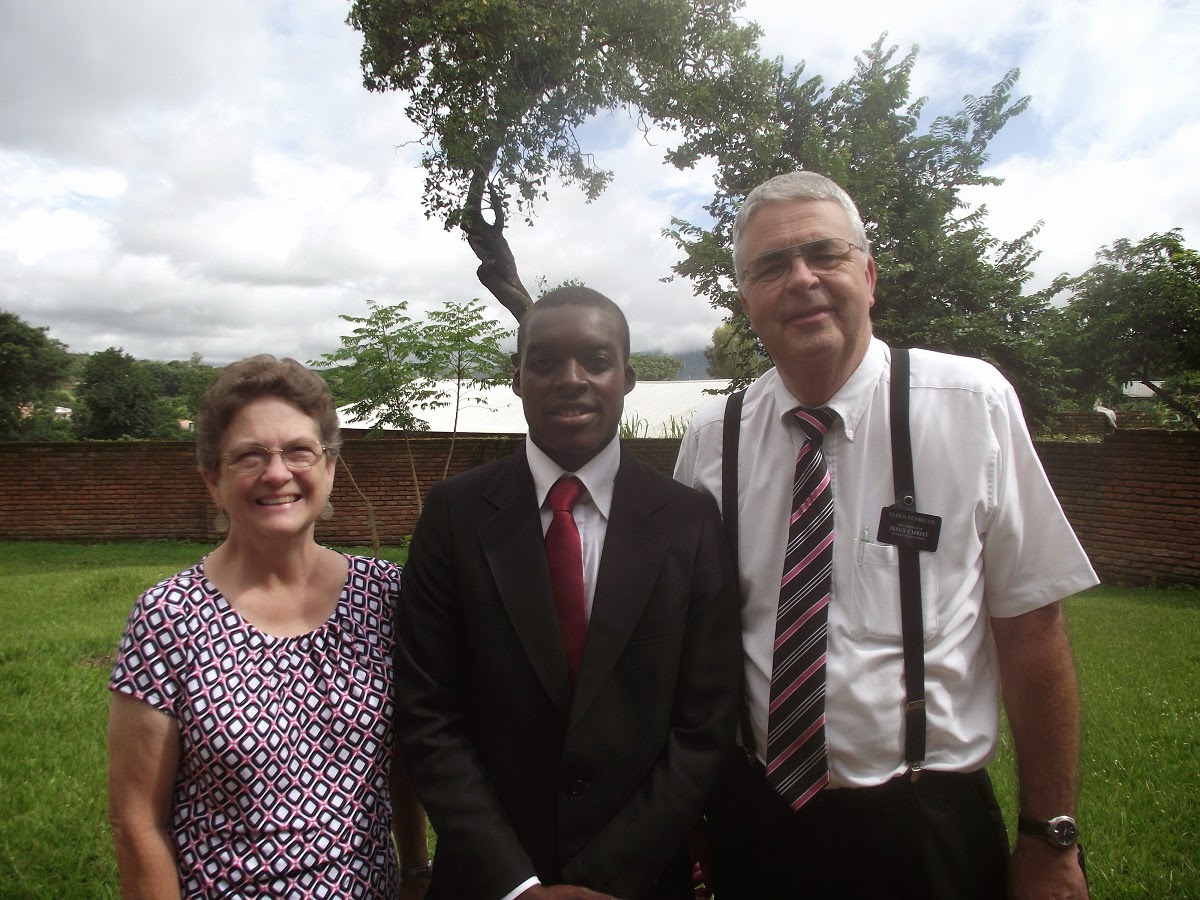 Elder Osman Njanji is the first Malawi native missionary to be called to labor outside of Africa.  He will be followed next month by Sister Agness Cherwa, the first Malawi sister missionary to be called to labor outside Africa.  She will leave for the Manchester (UK) MTC on 12/03/15 to serve in the London South Mission.  They are both from Ndirande Branch, Blantyre District.  That branch is meeting in an old house, which even with two interior walls removed will only hold about 70 people, and they have had over 100 attend at Sacrament meeting.  What an exciting time to serve in Malawi and be a part of preparing these young people to leave!

Early Wed morning, I got a text message asking me to deliver the weight-lifting set from the Zone Leader's flat to another companionship across town.  No emergency, they just thought about it when they got out of bed at 6:30 and sent me a text, but early a.m. texts usually are about sick missionaries, so I ran down the hall to take my phone off the charger.  That started my day.

About the time I got out of the shower, Elder Beal called and asked if they could exchange cars for the day.  The alarm interlock button on their car had disintegrated, leaving the parts laying on the bottom of the floor, and unable to proceed, since the security system shuts off the engine if you don't disarm it with the "secret" button.  That meant I couldn't even drive it to the dealership for service.

So I delivered "Princess" (the STL's spare car) to the Beal's and they rushed off to their funeral.  I hurried back to our house to pick up Sister Bodily (Humanitarian Missionary) so that she could meet the trucks in Limbe to load the flood relief supplies for transport to Chikhwawa the next day.  Elder Bodily had driven down to Chikhwawa early in the morning to make specific arrangements for the deliveries to various camps.  Not wanting to leave Sis. Bodily alone in Limbe without contact, I had given her Sis. Reynolds cell phone in case she needed to contact us.  I then drove home to get breakfast, and gave my phone to Sis. Reynolds so she could call the Ndirande Elders about Elder Njanji's clothes while I ate.

Elder Njanji had been set apart on Tuesday afternoon, and spent the day with the Ndirande Elders, then was dropped off at our house so that we could take him to the airport.  Unfortunately, he had placed his p-day clothes in Elder Doig's backpack, and forgotten to take them out while at our house to transfer to his luggage. They arranged to meet us at the petrol station, which they did, along with the family.  Unfortunately President Matale was not there.  We had let the Elders go, not remembering that I did not have my phone.  We waited for 15 minutes, finally we drove back to the house and retrieved my phone, found out that there had been a miscommunication about meeting P. Matale, and then we hurried to Michuru to pick him up at his home.  He sent us off on an African shortcut so that we could go directly to the airport, and amid l8" deep mudholes and large rocks on a one lane street with two-way traffic (it is still the rainy season).  Fortunately, we made it to the airport with time enough to have Elder Njanji's papers checked and catch his flight, along with P. Matale. We waited there until I was sure he was safely in the boarding area, took his parents back to the petrol station in Ndirande, and then drove home for lunch.

About this time I get a call from the Zone Leaders to tell me their car (Patches) won't move, so I grab a sandwich and drive to their last appointment site to find that the clutch had been burned out.  Elder S. was just learning to drive a stick transmission, and I'm afraid he was a little too hard on the clutch on the hill leaving their flat each morning.  It is a difficult task for an experienced driver, so I couldn't be too surprised.  We left the truck parked at the member's house, I took them to a take-away where they bought lunch while I picked up Sister Reynolds' grocery order at the store next door.  Then I dropped them off at their next appointment and called the Isuzu dealer to pick up the car.  Unfortunately it was too late to do that on Wednesday so they would be on foot for several days.

I drove back to the house to drop of the groceries and pick up my toolbox, and then to Elder and Sister Beal's flat to jury-rig the security button so that I could move that car.  By the time I got it going, it was almost dark and Beal's arrived home to let me know that they had spent the entire day getting "Princess" and the funeral bus out of the mud.  That's another story all by itself.

About 6:30 the Zone Leaders' called and said they forgot to tell me they hadn't had water at their flat for several days.  Could I please pick them and their emergency water barrels up so they could get water from our flat?  By the time we took care of filling and unloading 150 liters of water it was 8:30 or so, and I got home to eat and go to bed, since we would be leaving for Chikhwawa the next morning around 6:00AM which meant a 5:00AM wakeup time.

I now think that this rates as my all-around craziest Wednesday in my entire life, if  not so for our mission!   So now I'm down two trucks, and won't be home all day tomorrow.  Life is good, I'm just glad that all the trouble happened while we were still here and didn't occur the day after we left, with the Beal's having to handle the craziness....
Posted by Ann and Ken at 11:36 AM